You are here: Home › Updates › November Honours for Our Brothers 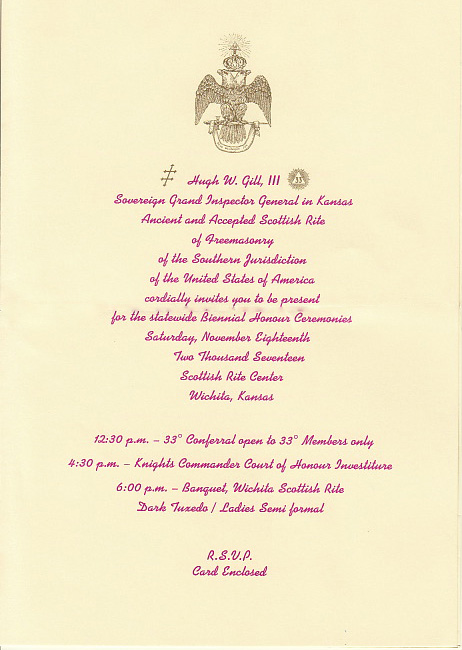 All Scottish Rite brothers in our Valley should have received their invitation (left) to the Biennial Honour Ceremonies on November 18th.  Two Armed Forces Scottish Rite Bodies brothers have been elected by the Supreme Council at its biennial session to receive honours: Brother Steve Kempf will be conferred the honour of the 33rd Degree, Inspector General Honorary (IGH) and Brother Jerry Osborne will be invested with the rank and dignity of Knight Commander Court of Honour (KCCH).

If you have not responded, and don’t plan to blast pheasants in Graham County with the Grand Master, please take this time to respond either with the card enclosed with the invitation or by going to the Kansas Scottish Rite web site and making your reservations there.

Ill Hugh Gill, 33°, Sovereign Grand Inspector General (SGIG) in Kansas, will host the honors conferral ceremonies at the Scottish Rite Temple in Wichita on 18 November. While the 33rd Degree ceremony is a closed event the KCCH investiture is open to the general public. A banquet will follow the ceremonies on the evening of the 18th. Illustrious Tom Dials, Personal Representative to the Inspector General of Kansas, encourages all to attend and acknowledge and support Brothers Kempf and Osborn.