You are here: Home › Updates › Brothers Remembered in Moving Ceremony

Remembrance. In a moving ceremony led by Illustrious Brother Steve Songer, 33°, Inspector Generals Honorary, the brothers of Fort Leavenworth Valley of the Armed Forces Scottish Rite Bodies honored those brothers who laid down their working tools and are now enjoying the fruits of their labors in the celestial lodge above. 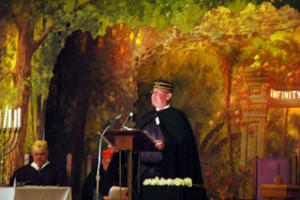 Renewal. The ceremony, timed to be close to the Vernal Equinox, occurring March 20th this year, also marks the transition from winter to spring, from death to rebirth, and from darkness to light.  Although not a religious service, the ceremony draws on many traditions to help each brother turn from the sadness or selfishness of his life toward loving his brothers, neighbors, and Supreme Being. 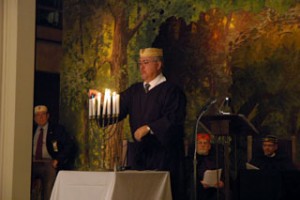 The ceremony took place after a delicious festive board the evening of Thursday, March 10th, the usual stated meeting night of the Scottish Rite on Fort Leavenworth.  The dinner and ceremony were open to the public and was attended by wives and friends of local Masons. 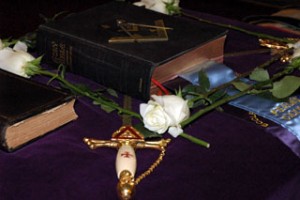 White roses were placed on the altar, one for each brother who had passed away during the preceding year, and one for all the brothers before that.  Each name was read, then the list burned to ashes.  It is now up to each brother to carry on the names and good deeds of their predecessors.