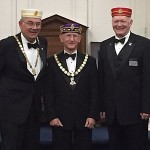 Brother Vic Henke, 32°, was honored in Wichita on Saturday, November 21st by being inducted into the Knights Commandry Court of Honour (KCCH). He has donned the red cap and now labor a among us with his new title. 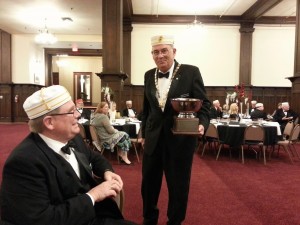 side note:  At the honors banquet that evening, the 2015 Scottish Rite Rite Care golf tournament trophy was awarded to Brothers Steven Humes and Jerry Osborne.   Ill. Tom Dials is seen here receiving the trophy on behalf of the Valley of Fort Leavenworth as Bro. Herb looks on.