You are here: Home › Updates › That Was Excellent! 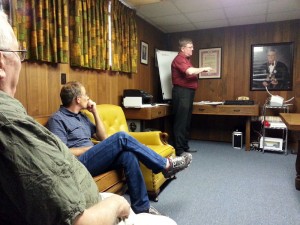 Only a few seats left for School of Light led by Bro. Herb.

After a ceremonial toast to the School of Light, sixteen Scottish Rite brothers gathered in the Boughton Library and shared their knowledge of the symbolism of the Entered Apprentice degree led by R:. W.: Herb Merrick, 33 IGH.

No matter how many times a Mason may see or participate in the exemplification of the first degree, there is a ton of great symbolism that is worthy of our study and the lessons taught worthy of our emulation.  We discussed interpretations of Pike, Ashmole, and several others.  From the geometrical aspects to the moral instruction, our degrees are packed with a lot of wisdom, if we invest the time to make those discoveries.  It is especially enlightening when you get to share the journey of discovery with so many attentive and interested brothers. 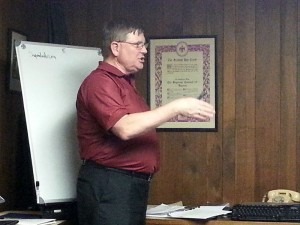 Brother Herb at the School of Light 16JUN15

It is very apparent that Brother Herb put much time and care in preparation of the “Symbolism in the First Degree”.  From the beginning to the conclusion, which seemed to come too soon, every brother was left with the similar feeling of, “That was excellent!”

Brother Herb will continue the discussion series at the next session.  The next School of Light will be the second Tuesday of July beginning at 1900 hours.  Yes, that’s how enthusiastic we have become with this group.  Mark your calendar now so you won’t miss it. 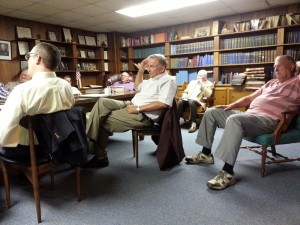 The attentive group at The School of Light